The Beautiful Blessing of Pregnancy

In some ways life has gotten a lot easier and in some ways notably harder. At 33 weeks pregnant the idea of picking something up off the floor is just not nearly as plausible as it was before. Putting my socks on let alone tying my shoes is a feat and I find myself sitting on the floor most days to get down to the children’s level (which works well until I have to get up!).

Sleep is tricky and varies from night to night and my ability to move quickly is somewhat out of order. My thoughts are not nearly as gathered and there are days when I feel like I’m losing the plot. It’s as though words have vanished from my vocabulary and/or have dropped right out of my head. With that being said, there are days where I find fleeting moments of clarity, focus, and waves of inspiration to accomplish all that I can.

The part that has gotten easier is softening and letting go. Pregnancy has been the most humbling journey of ditching expectations and the need for control. I have also found myself humoured by many of the challenges and memory lapses not to mention some of the outside commentary.

January 1st I set a new years resolution to make my bed everyday. It’s January 14 and I think I’ve managed to make it twice which required a lot of effort. I mean really, what’s the point if it’s a struggle and when you are this pregnant you really have to pick your battles. Our Christmas tree is still up (fully decorated) and the house is less than orderly, and the ironic part is, I’m ok with it.

Pre-pregnant me used to be a hyper vigilant over achiever. A perfectionist to say the least. What I have found most liberating through pregnancy is the ability to lighten up, find humour, and simply let go. Things aren’t as they once were but I am doing the best I can. Pregnancy has given me the gift of being more human. I think we all strive to create a flawless exterior and to have ourselves in check. We create an image of “keeping it together” which energetically creates a certain level of tightness and hardening. Where is the space to be human? To make mistakes, to leave the bed unmade, and to wholeheartedly love and accept ourselves in doing so.

The more I have softened into the wild and wonderful ever-changing world of pregnancy, the more I have laughed and shared my moments of flawed perfection, the more connection, freedom, and authenticity I have found. I have forged some beautiful friendships around what is raw and what is real. How wonderful is it to be vulnerable, to share our moments of imperfection, and to find healing and humanness in doing so.

Pregnancy has also taught me to ask for help. As the owner of a growing and thriving business that doubled in size this past year, this has been essential. And as someone whose typical response was, “No, I’m good,” or, I’ve got this” when asked if I needed help, this is somewhat new. For some reason we take pride in being able to carry the load or to do it all ourselves. I am realizing that it’s just not necessary and by asking for help we are creating more space to be human and to let others in.

Tonight while standing in the bulk section at the grocery store I had a humbling moment of this. Here I was filling up a generous bag of cashews when suddenly a solid 2-3 cups poured all over the floor. We’re talking organic cashews at $4.99 / lb. I looked down and thought, well this is a pregnant persons worst nightmare (having to pick up hundreds of small items off the floor). So instead of feeling bad or embarrassed I simply asked for help. I will say that when you are visibly pregnant, people tend to rally around you. I laughed and apologized but felt absolutely no shame. The cashews continued to spill out of my grocery basket as I approached the til having then realized there was a hole in the bag. I continued to laugh inside which I could feel allowed me to soften on the outside.

As I think about bringing this little being into the world and all my hopes and dreams for her, ultimately, I wish that she allows herself to be human and that she softens into the most authentic version of herself. That she stumbles and falls and allows her process to be messy. That she makes mistakes and, learns, loves, and laughs along the way.

Nelson Mandala said it brilliantly, “We are all meant to shine, as children do. It’s not just in some of us; it’s in everyone. And as we let our own light shine, we unconsciously give other people permission to do the same.”

May this be a reminder to let the light of our humanness shine forth into the world.

With love and honesty,
Vanessa Lee

Stay in the loop 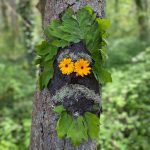 “I took a walk in the woods and came out taller than the trees.” – Henry David Thoreau Since closing both […] 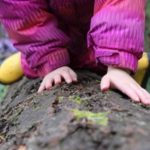 Image of the Child

“Stand aside for a while and leave room for learning, observe carefully what children do, and then, if you have […]